I really wish I had more than a full day to explore Budapest as there’s so much to see and do. The night that I arrived, I went on a river cruise of the Danube River and saw some beautiful sights. Why is it that cities look so spectacular when they’re all lit up? The cover photo was taken during the river cruise and is of the Hungarian Parliament.

Even the bridges were sparkling for us! 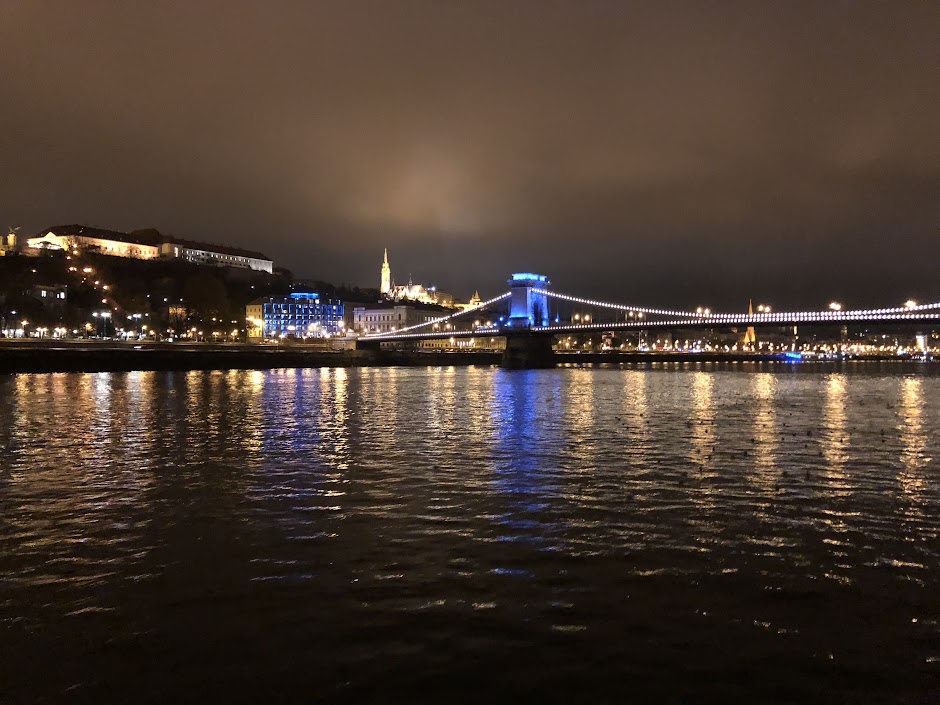 The next morning, I set out to wander around Budapest. I first visited the House of Terror museum. The museum was very well done and had a variety of exhibits to walk through. I’d highly recommend it if you’re into history and want to understand some of Hungary’s past.

Since I was visiting in late November, I got to enjoy Budapest’s Christmas markets. We were there early while they were still setting up and I just loved how the tree looked in front of St. Stephen’s Basilica. 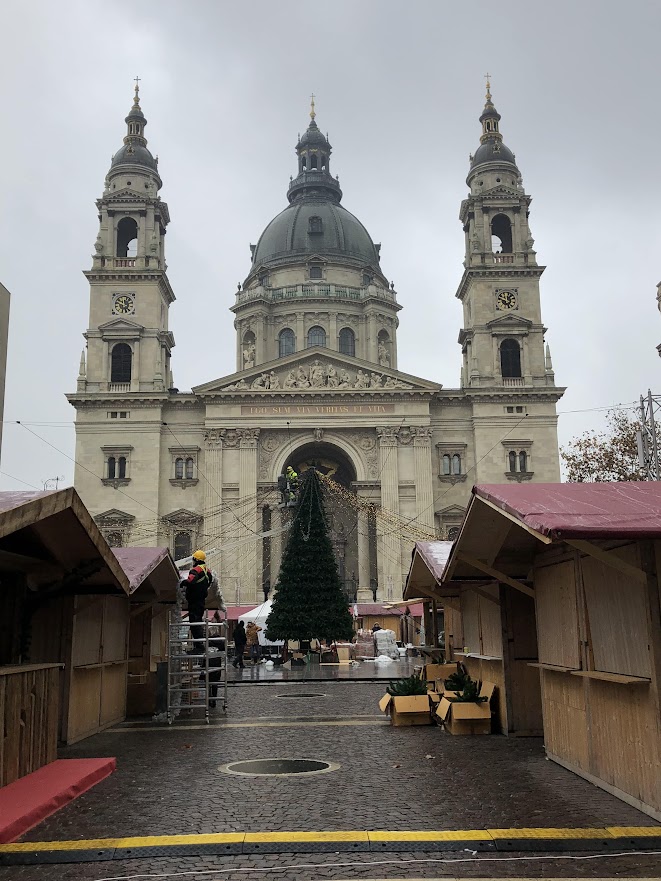 The artwork inside St. Stephen’s Basilica was beautiful. 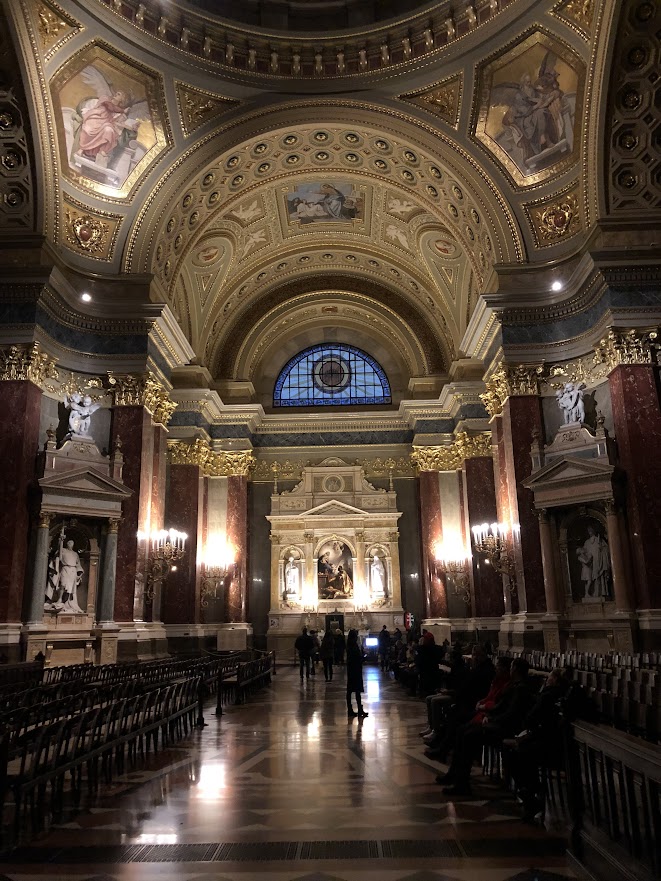 Apparently this is the holy right hand of St. Stephen! The Catholic Church always finds a way to make money. If you pay a little, it’ll light up inside and you can see it better. 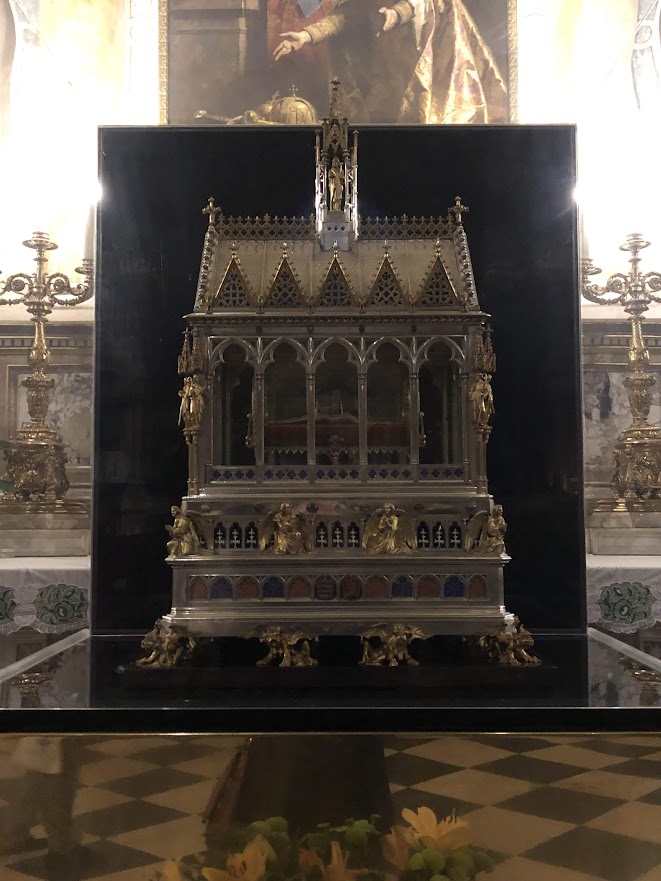 I really enjoyed the statues and monuments throughout Budapest. The one below was intriguing, he was just standing there as if he was directing traffic. They say you can rub his belly for good luck. 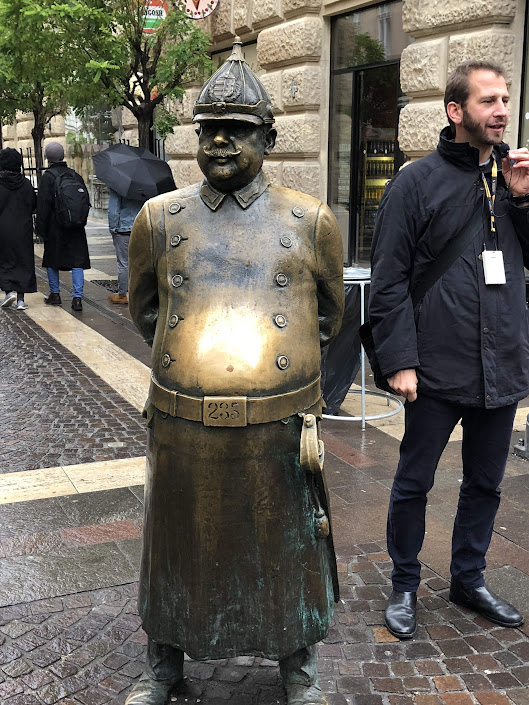 Below is one of the many memorials throughout Budapest. The city has a very rich history. 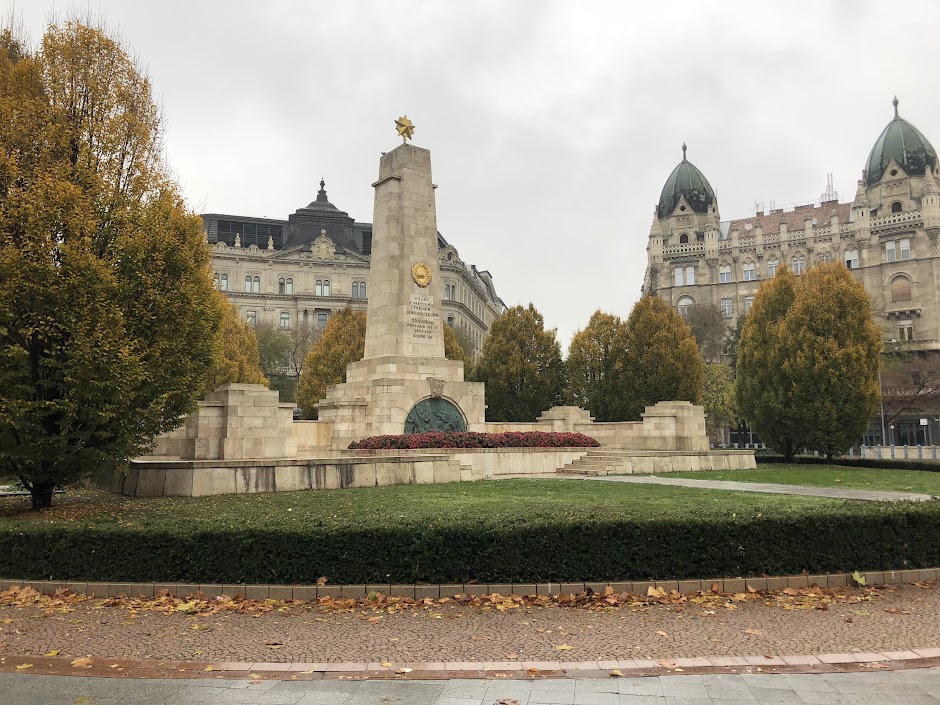 I was so surprised to see this Ronald Reagan statue as I was wandering around Budapest. Reagan was an integral part in ending the Cold War and thus the Russian influence over Hungary. 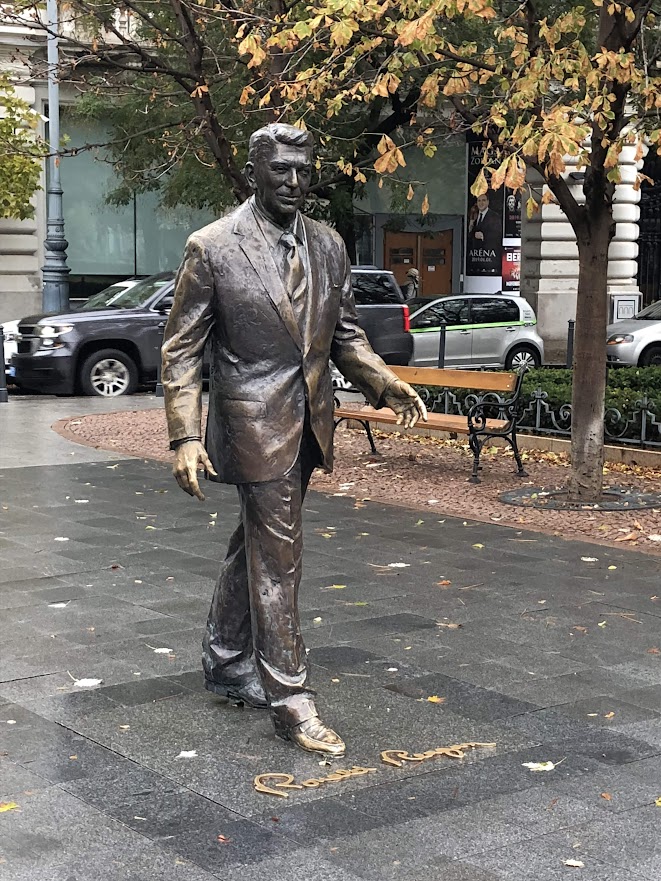 Below is a statue of Imre Nagy, who was the prime minister of Hungary. He had become a symbol of freedom. Below is the same building as the cover photo, the Hungarian Parliament. It looks so grand! 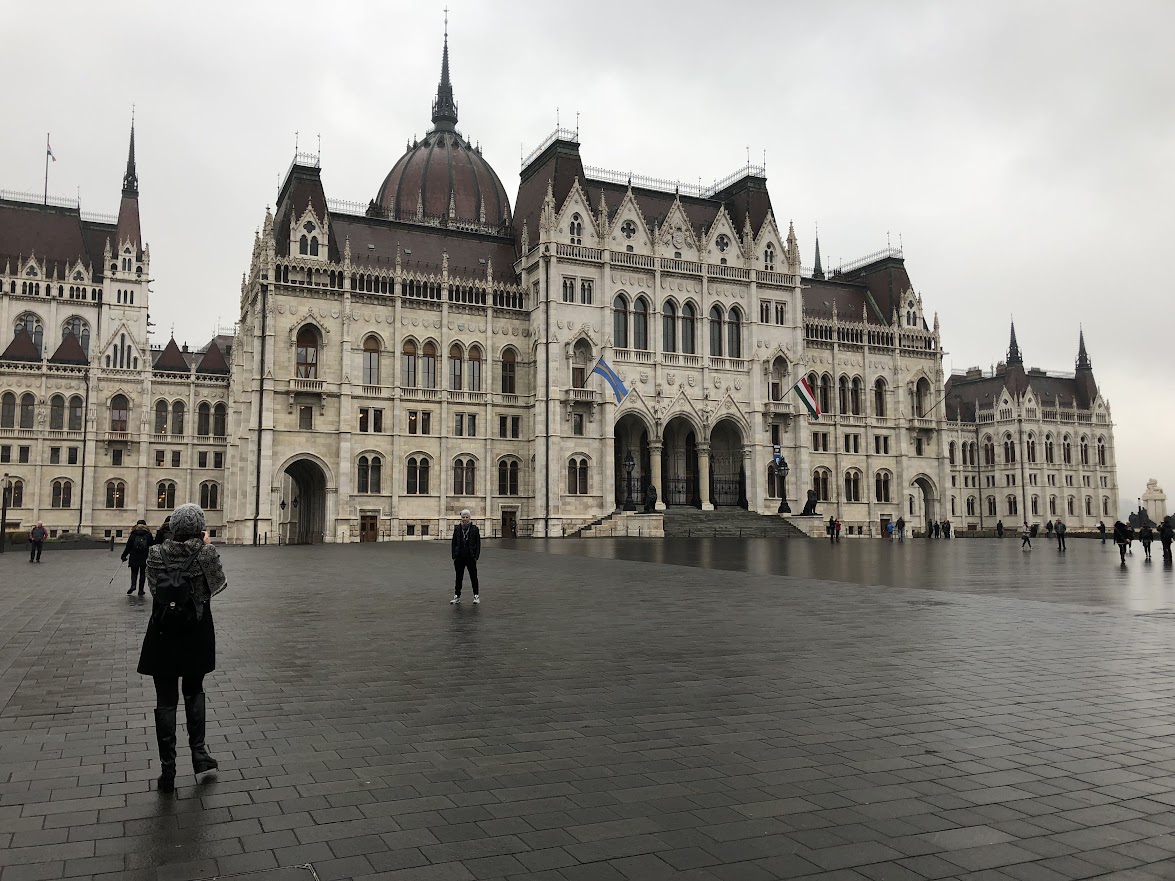 These shoes are a memorial to the Jews that were told to take off their shoes, stand there, and were then shot into the river during World War II. 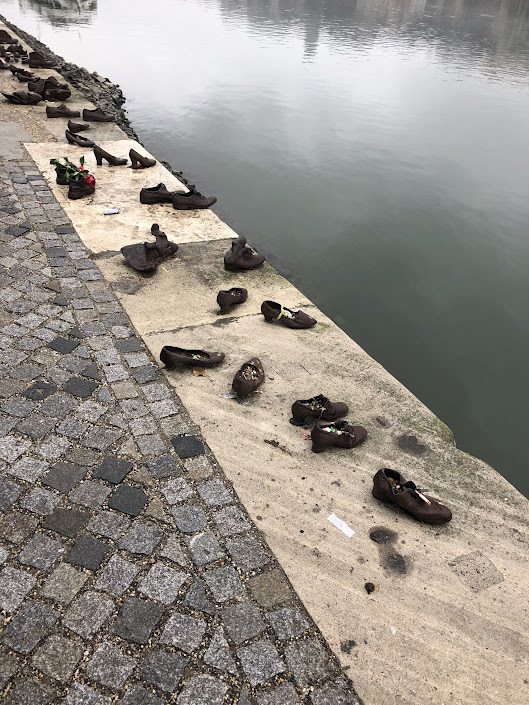 You can walk across that bridge to get between Buda and Pest. I wandered across it to venture up Buda Castle Hill and see a few sights up there. 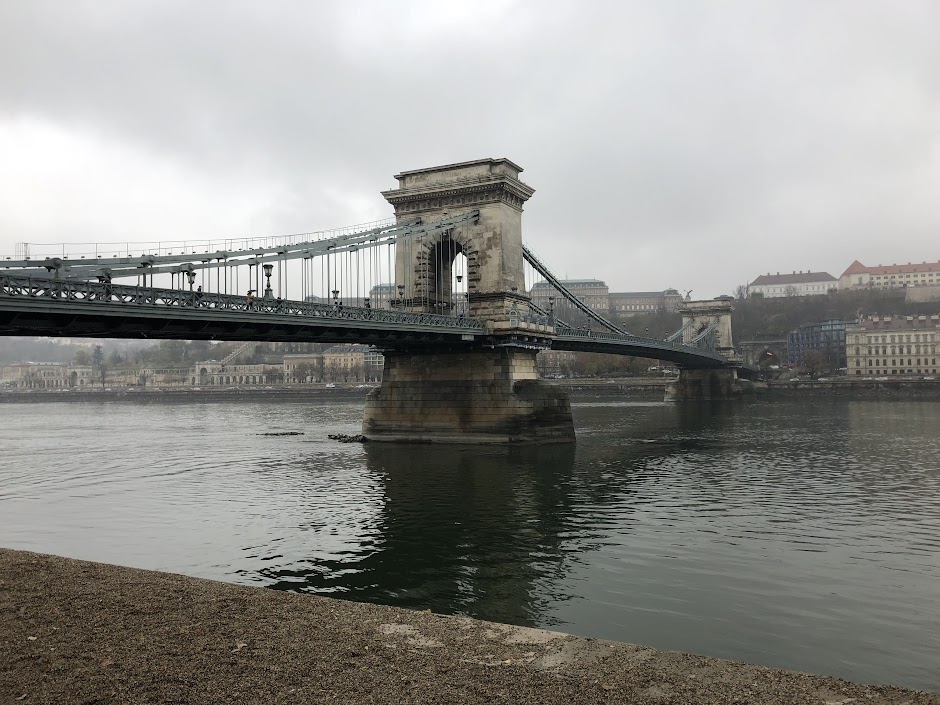 View of Buda Castle from the bridge. 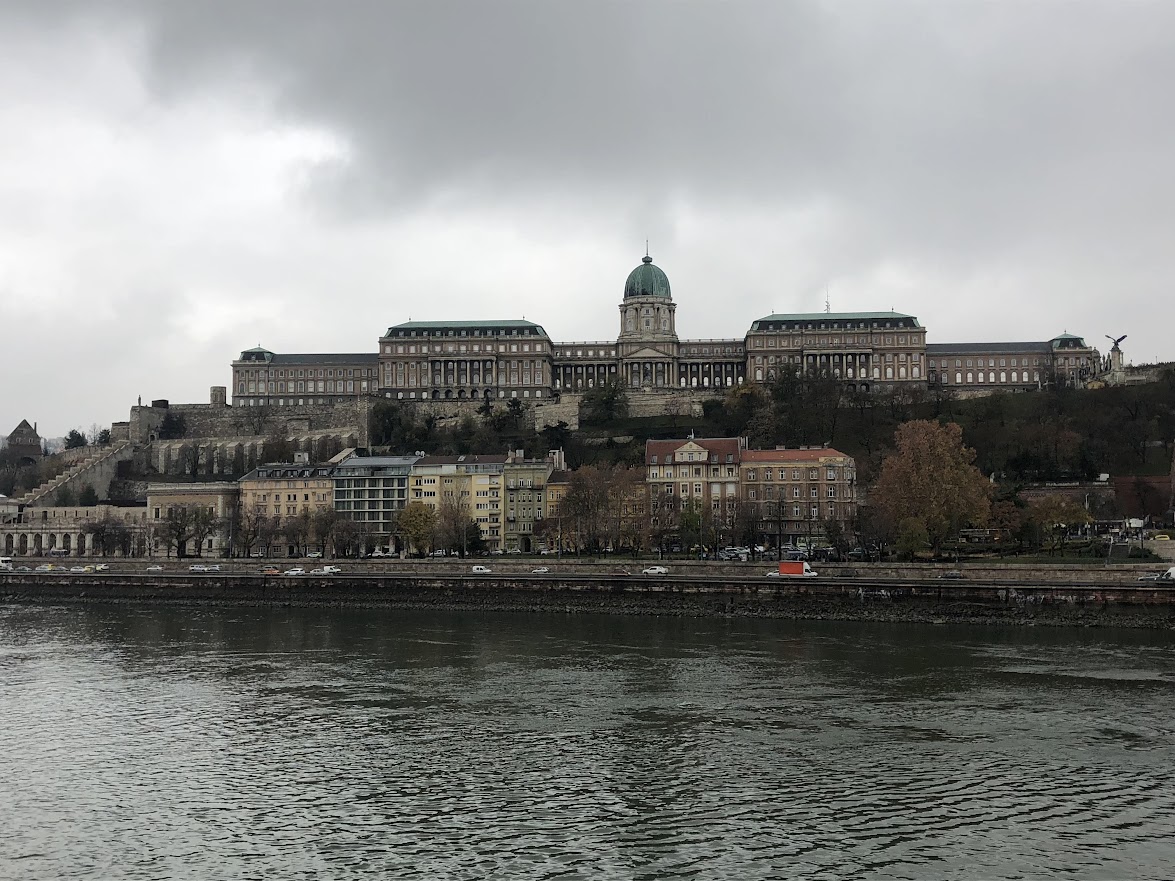 I was surprised to find some ruins up on Buda Castle Hill. I’m honestly not sure what used to be there, but it was neat looking down at them. 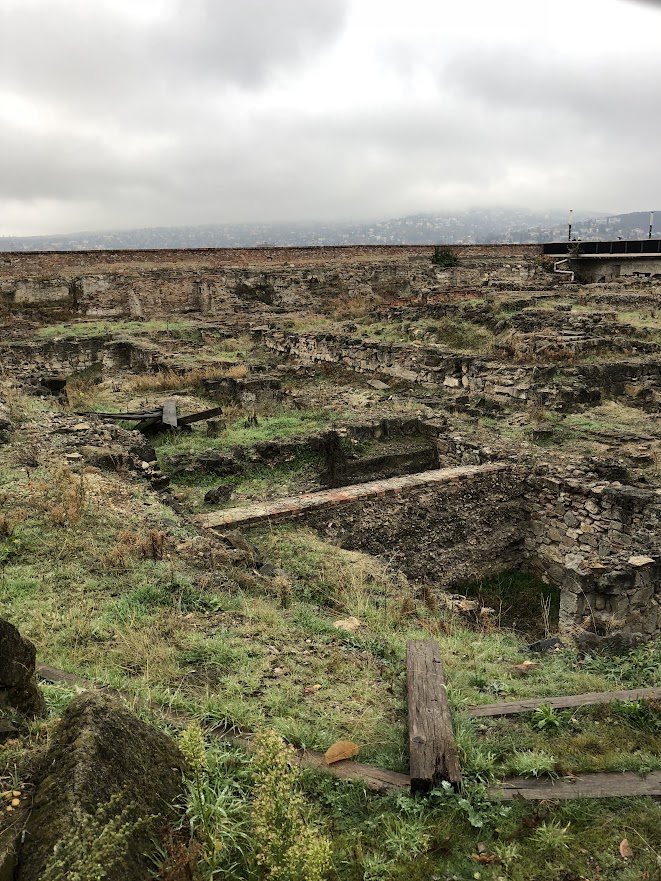 Fisherman’s Bastion is a must, mainly for the amazing views across the river. 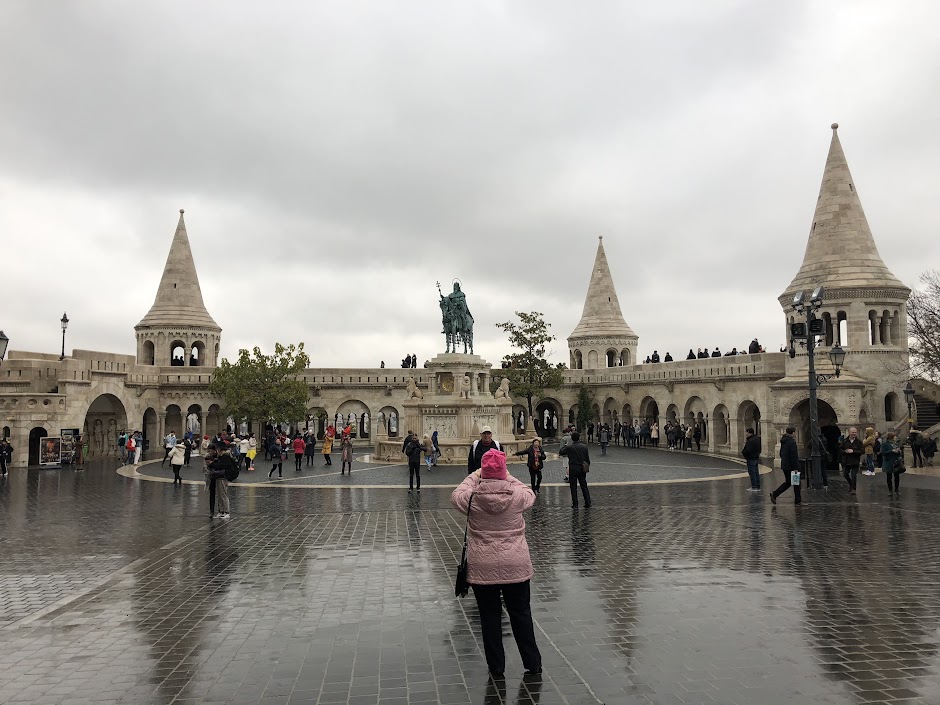 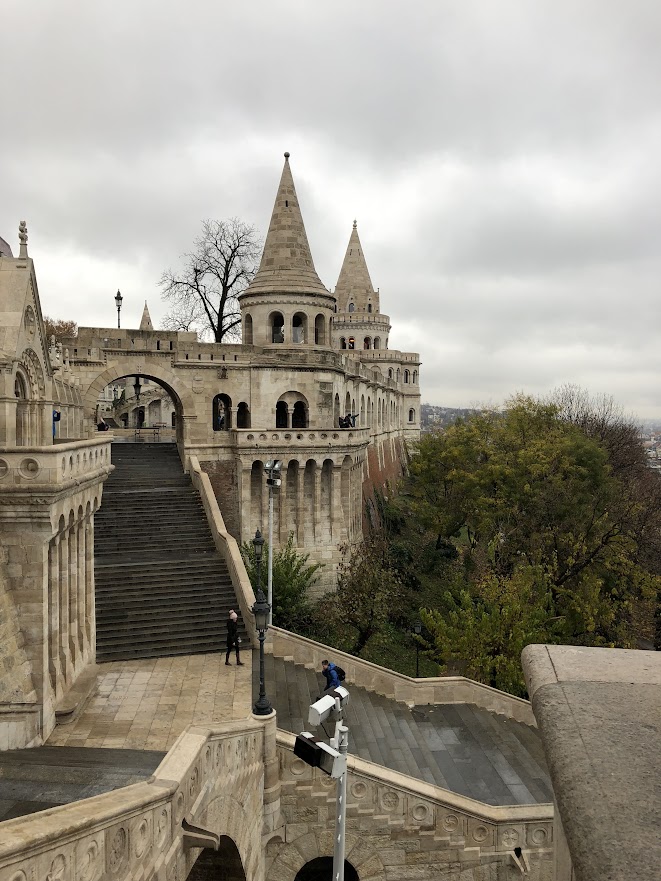 You can see the Parliament building off in the distance. 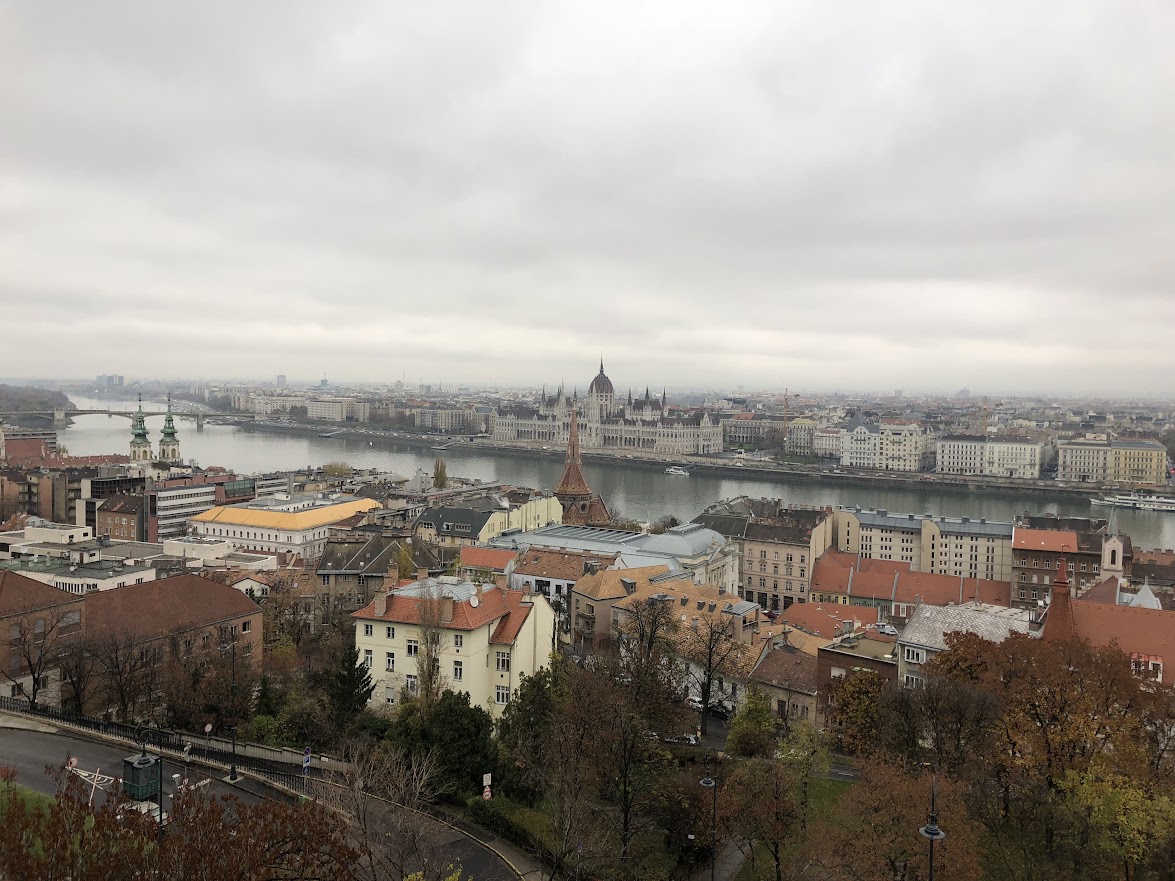 Below is the stunning Matthias Church. It does cost money to go inside and it isn’t much different than other churches/cathedrals. I enjoyed wandering around and taking a break from the cool weather outside. 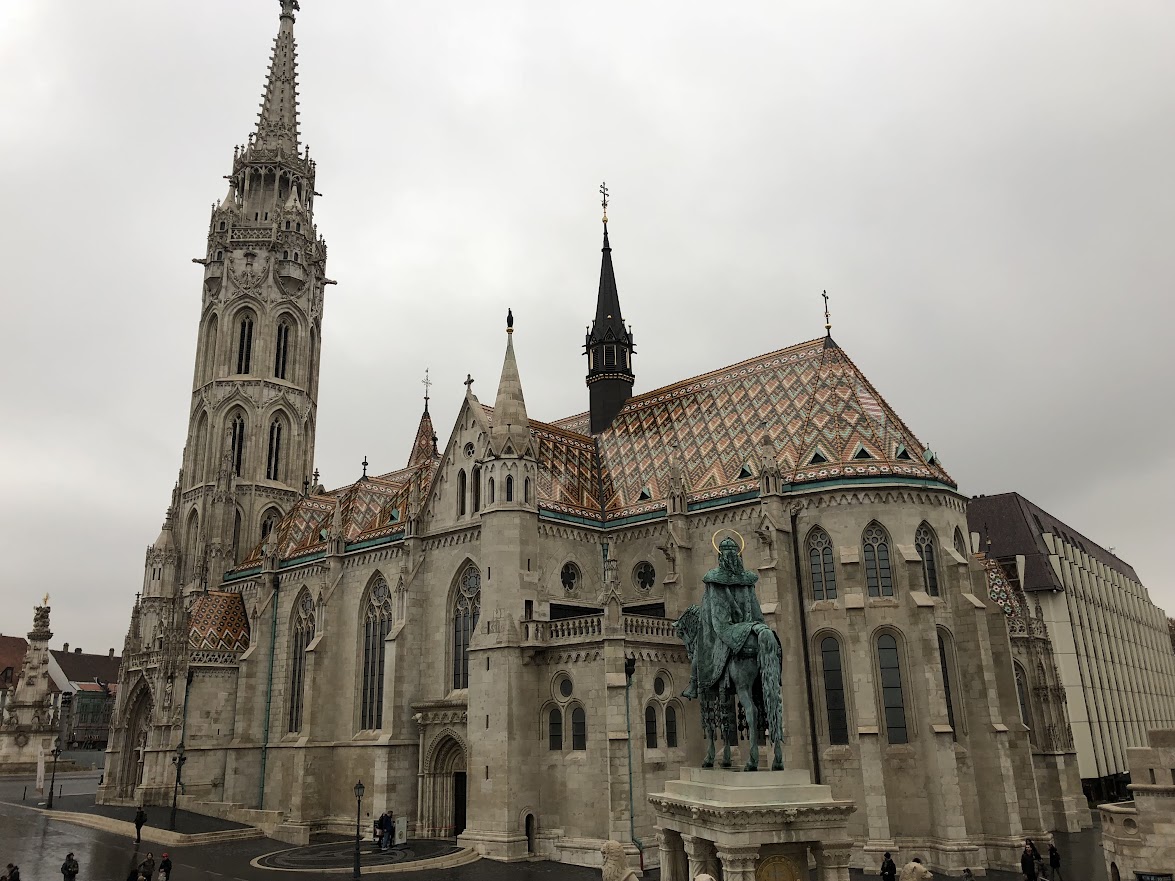 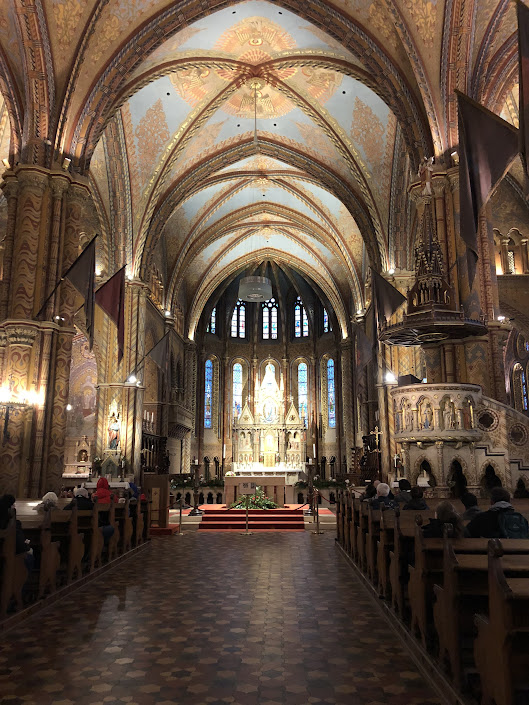 Not sure if I’d want to share a coffin like this with my loved one for the rest of my life, haha. But really, I love that they had dogs at their feet! 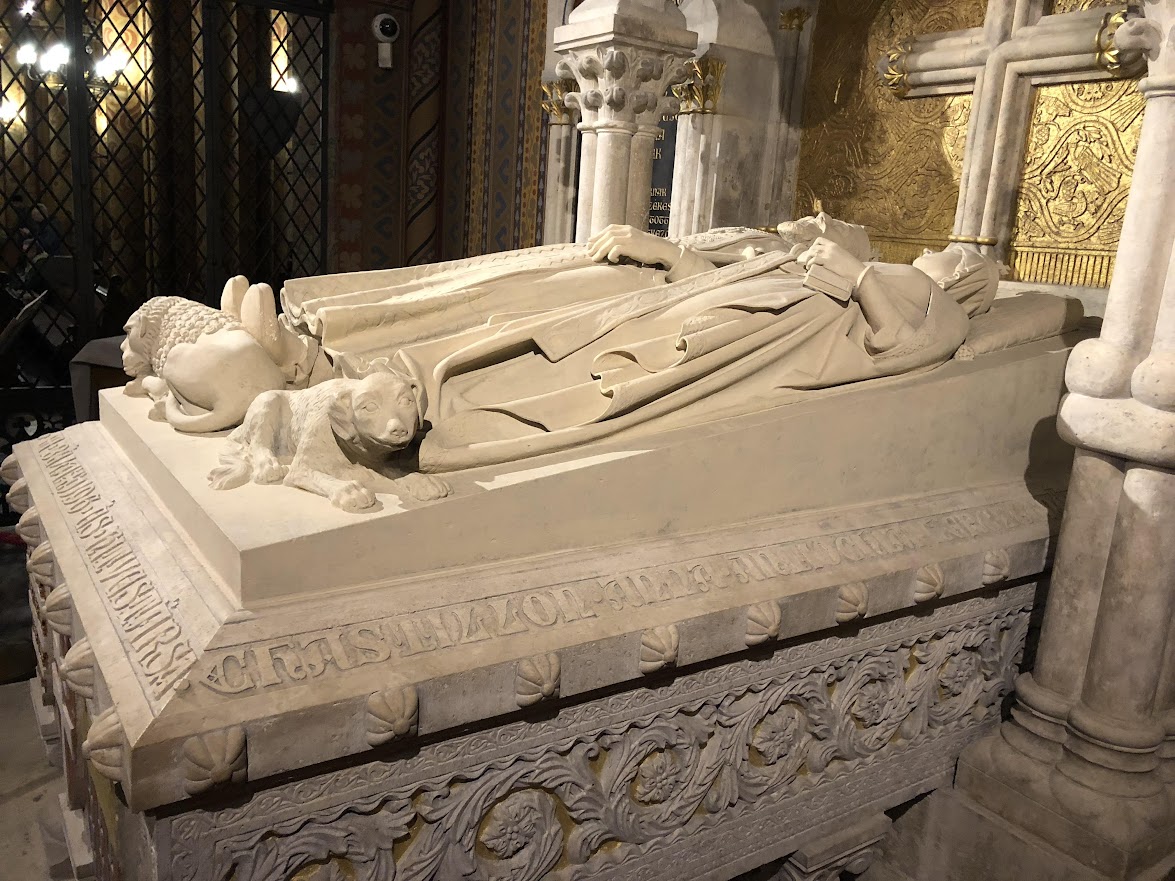 A really cool scale model of the area with the church and Fisherman’s Bastion. 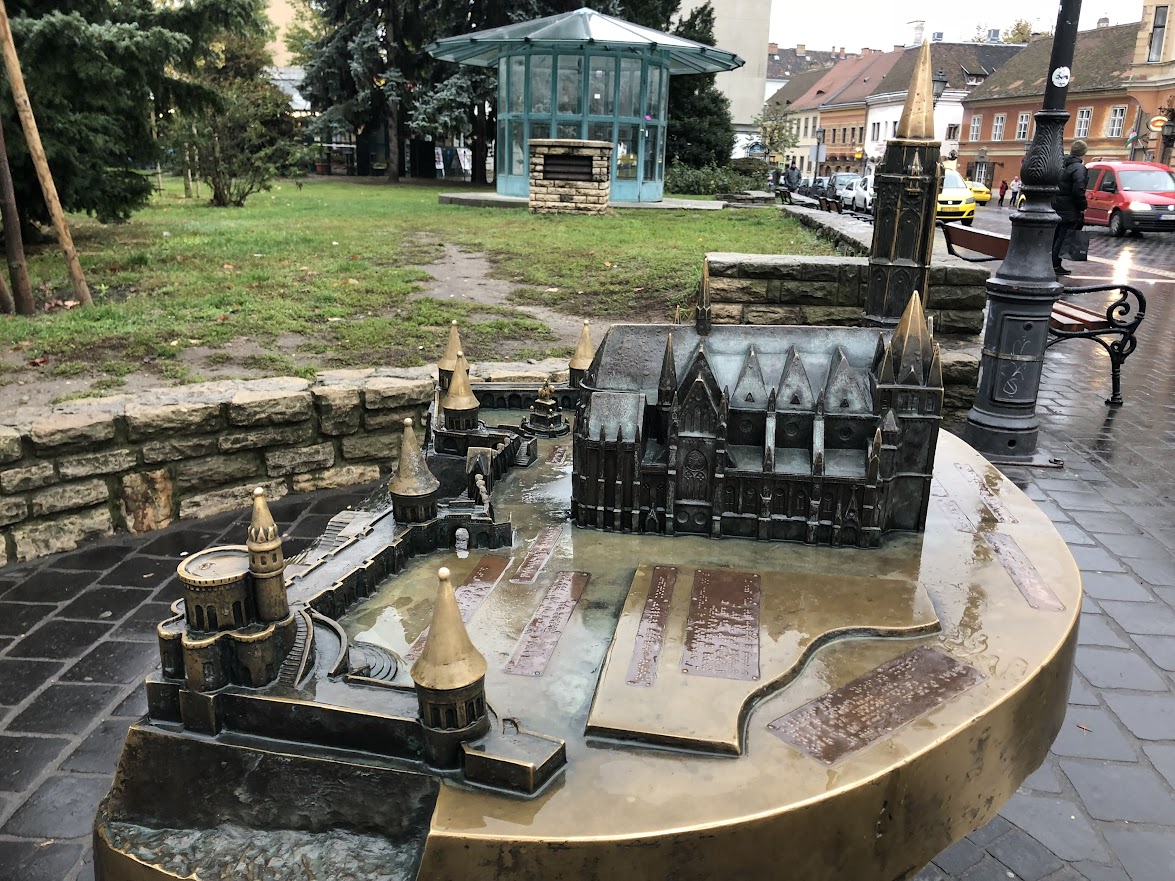 The Budapest History Museum was inside the Buda Castle. There were all kinds of exhibits, but I mostly enjoyed walking around down below! 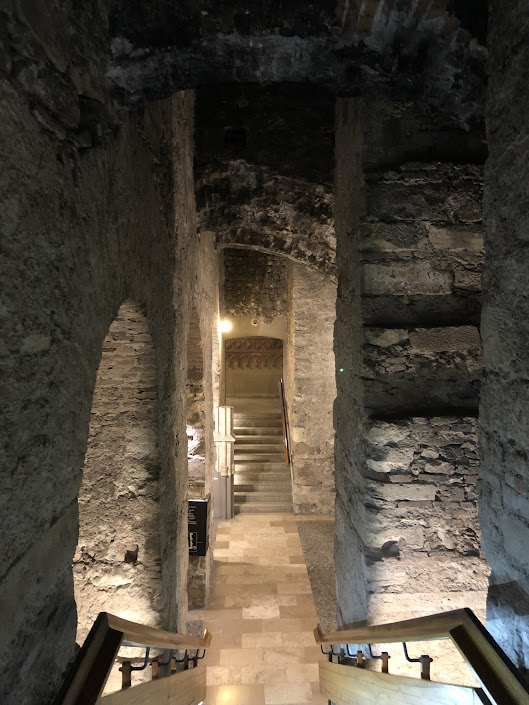 Budapest is a really lovely city to wander around. What are some of your favorite things to do in Budapest?

26 thoughts on “One Day in Budapest, Hungary”