The main reason for my visit to Croatia was to explore Dubrovnik. We were there in February, which was really nice because it wasn’t crowded. The major downside was that a lot of things were closed or closed very early in the afternoon. We actually struggled to find places open for dinner a few times. If I could do it over again, I probably would’ve visited in March or April instead.

With that being said, Dubrovnik really is just as magical as you’d expect. Below are a few pictures from me wandering around the city. I’ll have a second blog post on views from the city walls since there are soooo many pictures I’d love to share.

I got a few awesome views of Dubrovnik as our plane from Zagreb approached the airport. Check out the old city walls and all the buildings nicely packed inside! 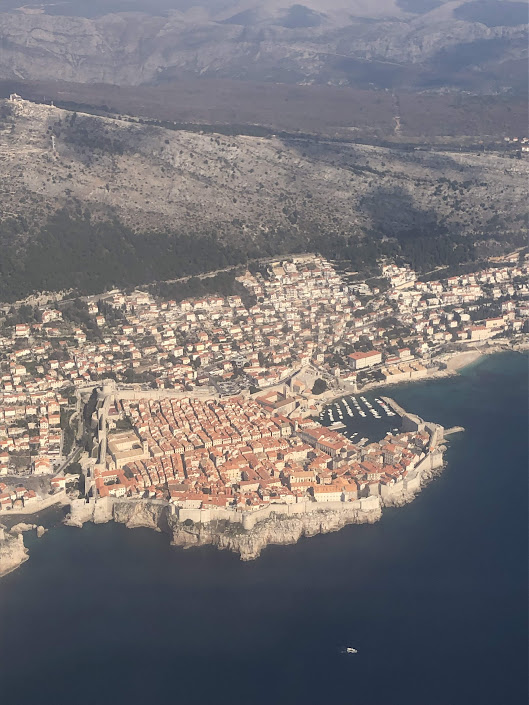 Lokrum Island is closed over the winter to give the animals on the island a chance to rest and have a break from tourists. I enjoyed seeing it from above as our plane from Zagreb flew over! 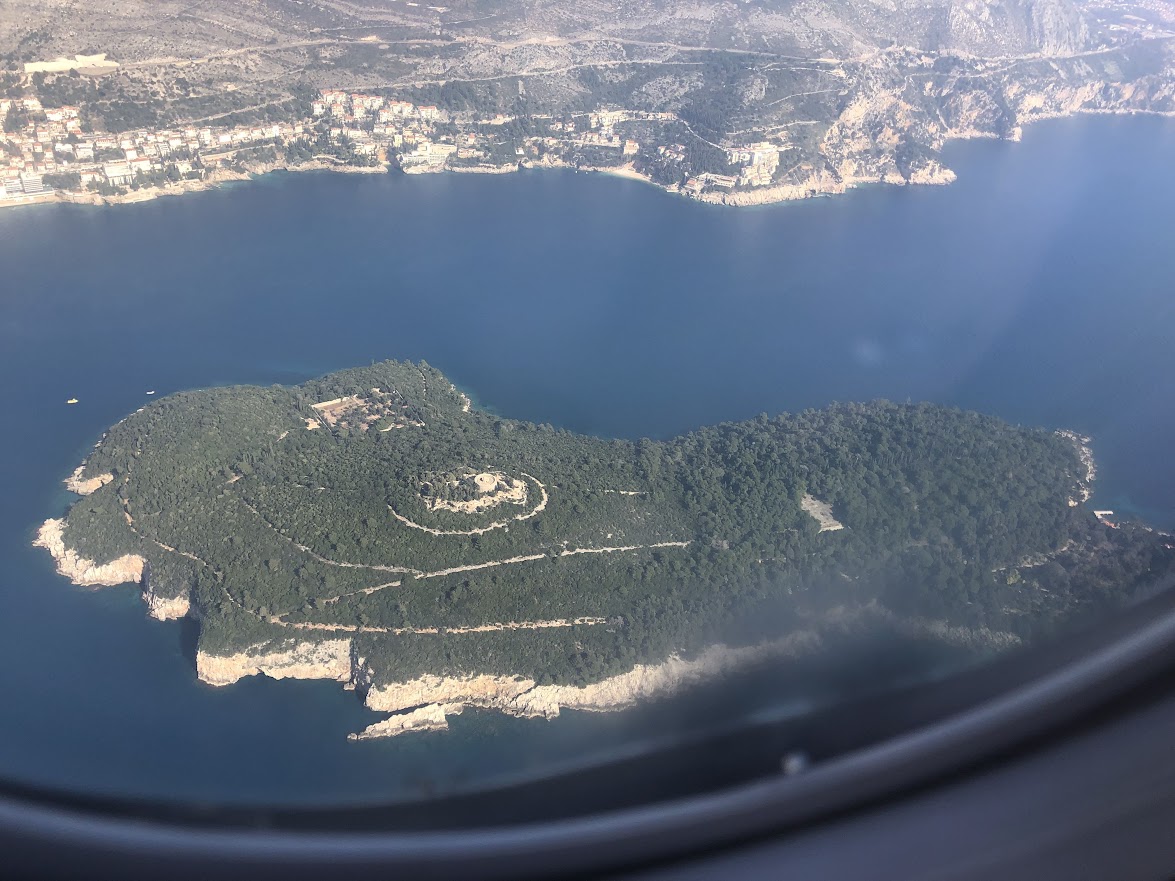 We stayed right outside Pile Gate, so this was our entrance and exit to the old town each day. 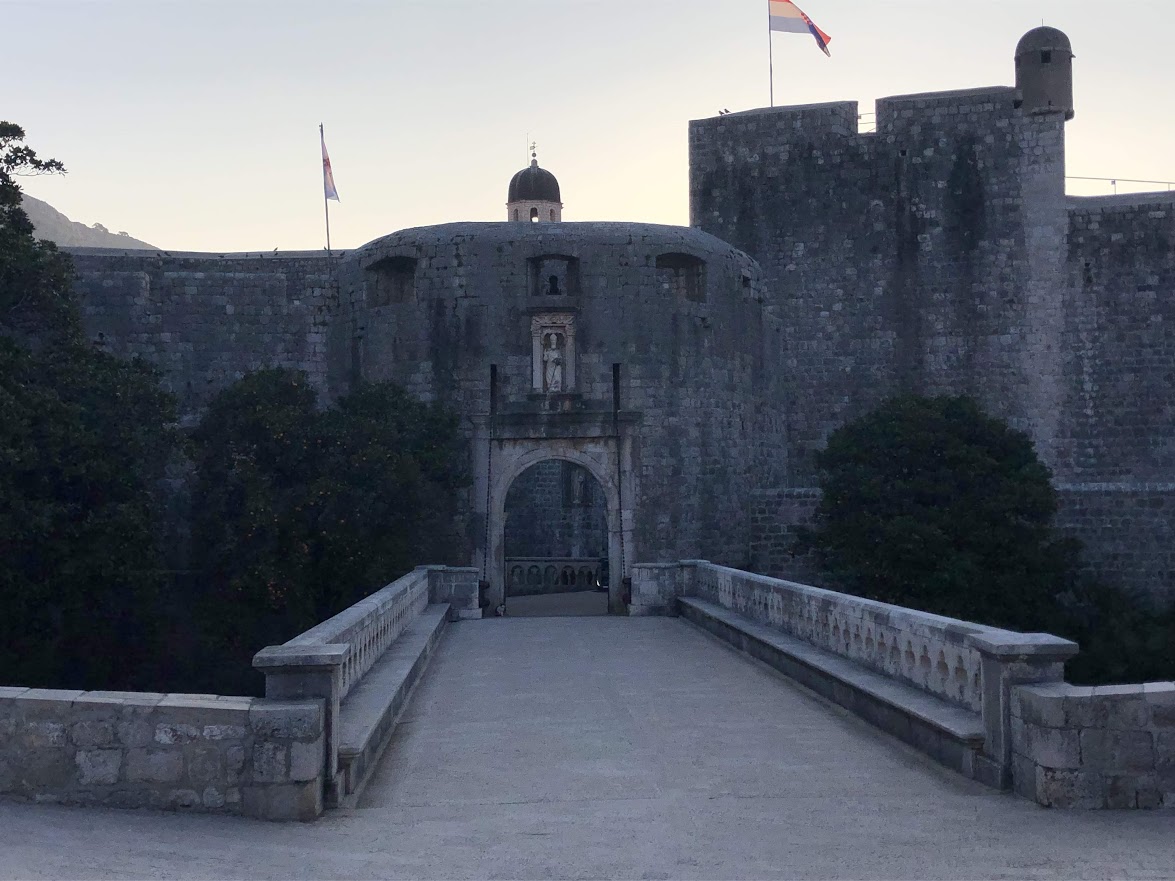 One major bonus of visiting in February – there were barely any other tourists around! This is the main street through the middle of the old city. 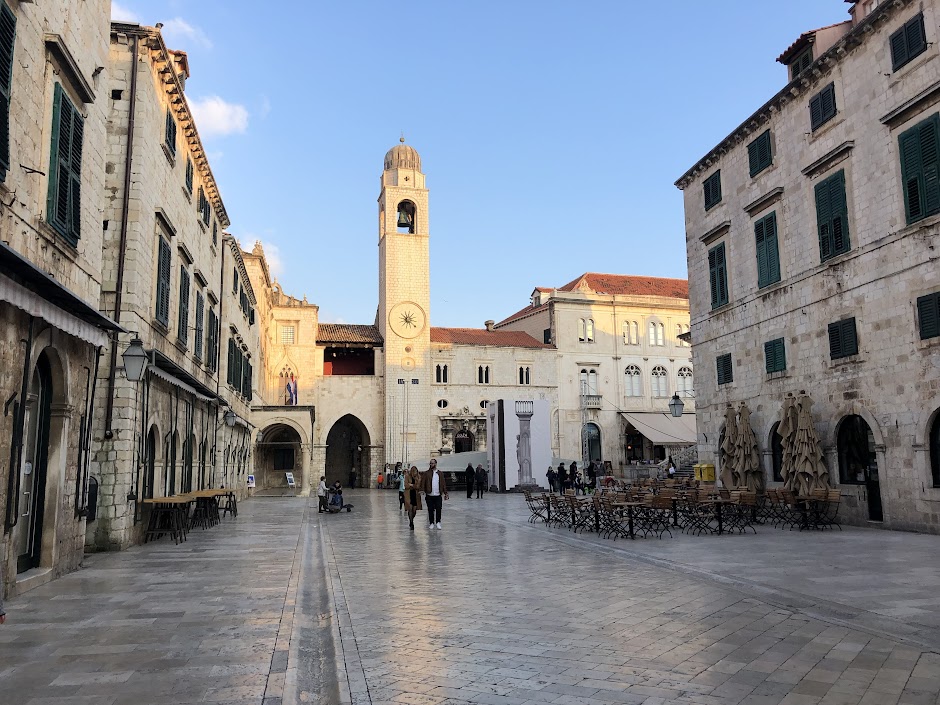 Another view of the main street. 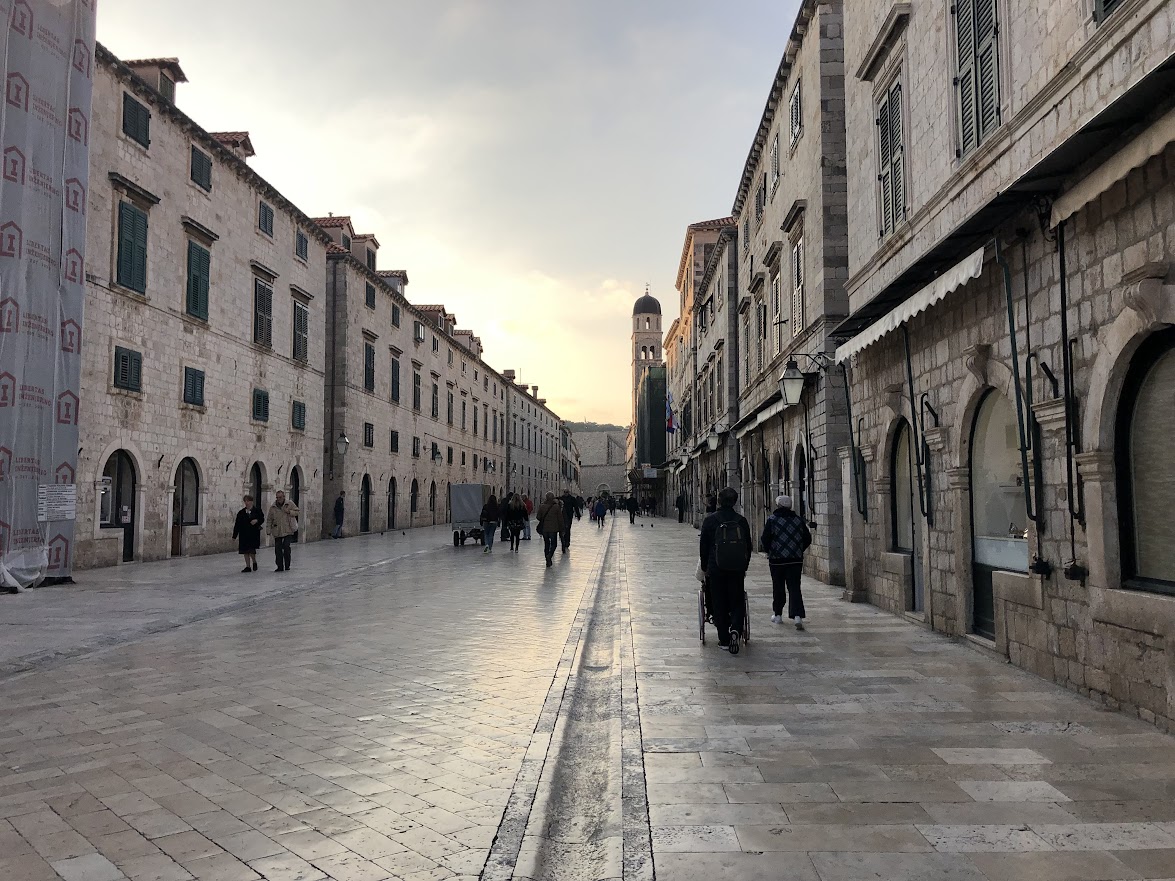 This church is right by Onofrio Fountain. I enjoyed admiring its architecture. 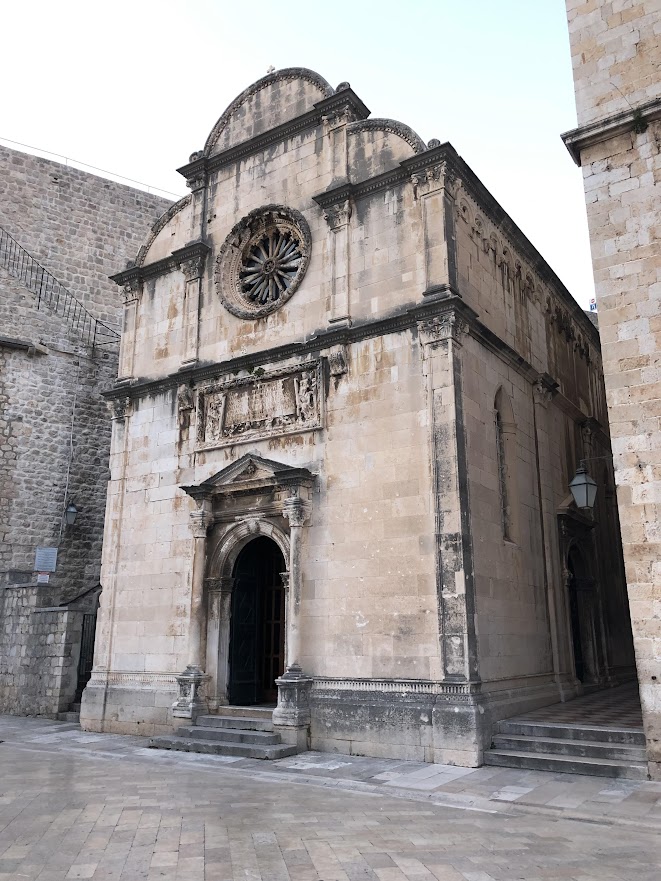 Onofrio Fountain is right by Pile Gate and seems to be the meeting point for most walking tours, including our Game of Thrones tour. The water comes out of the different faces along the side. 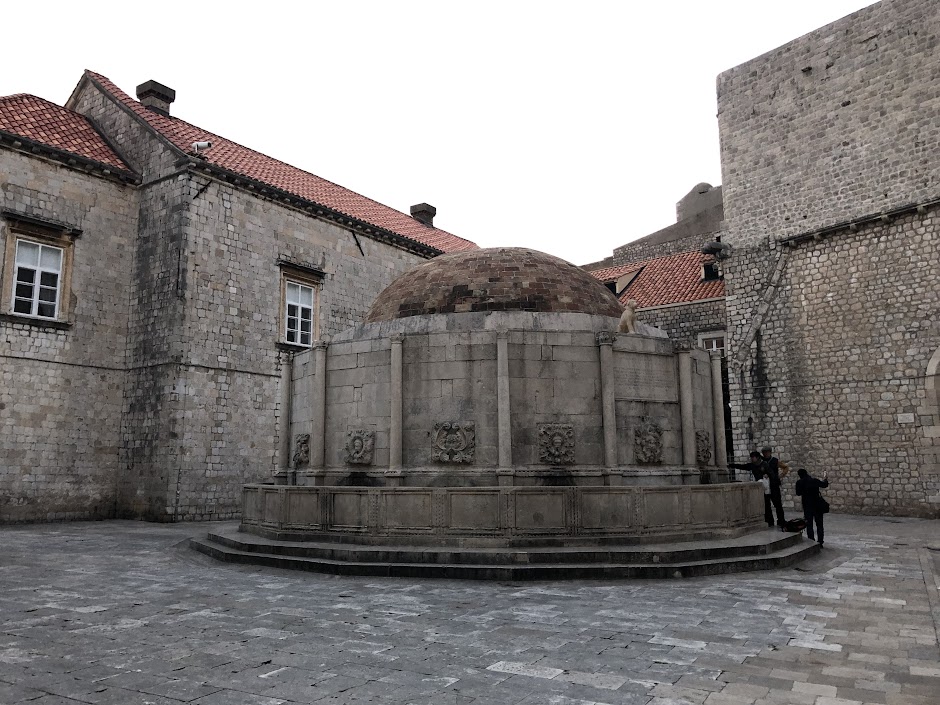 We spent some evenings just wandering around the city and felt very safe. Below are a few pictures of statues and buildings we stumbled upon. 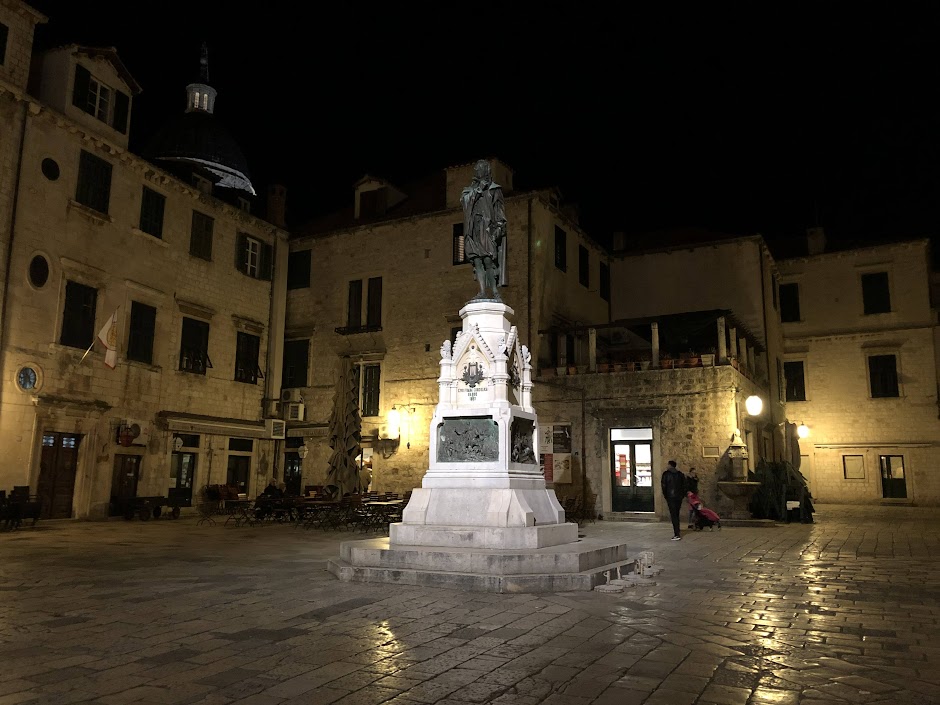 There are soooo many churches throughout Dubrovnik. Below is the Saint Ignatius church. 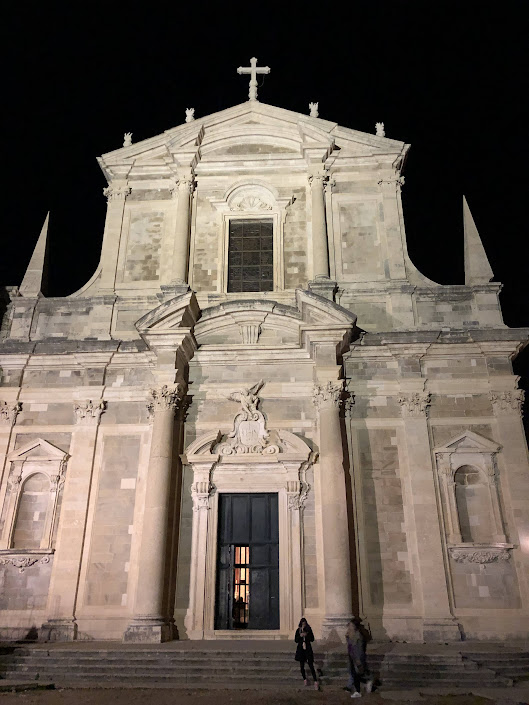 This bell tower was also a nice point of reference while wandering around the city. It’s located on the opposite end as Pile Gate. 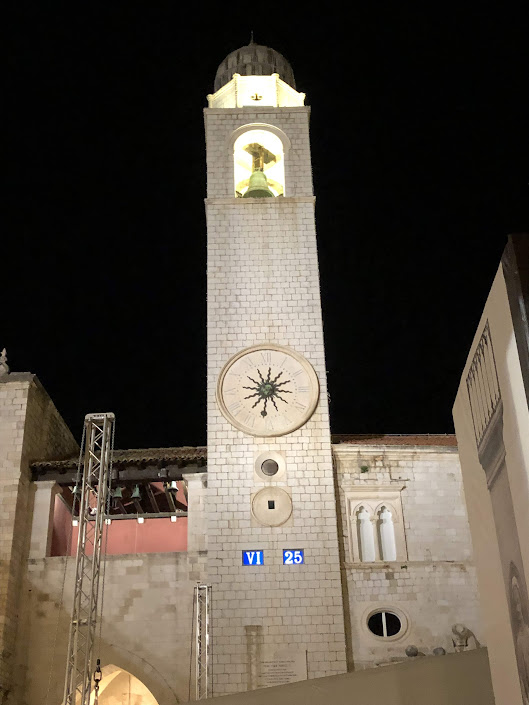 Another church, the church of Saint Blaise. Check out the stained glass! 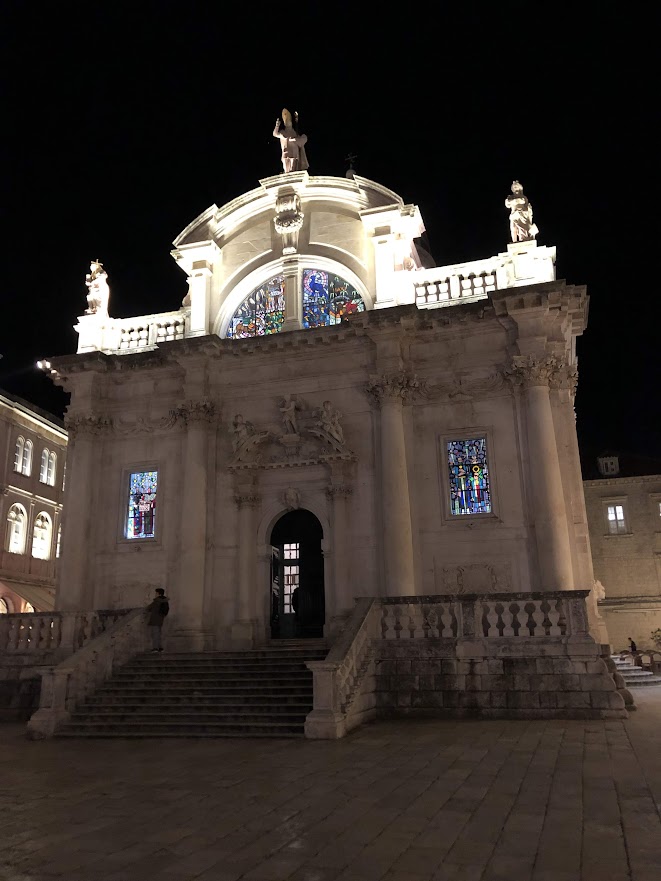 The alley ways off the main street were narrow and sometimes difficult to navigate. 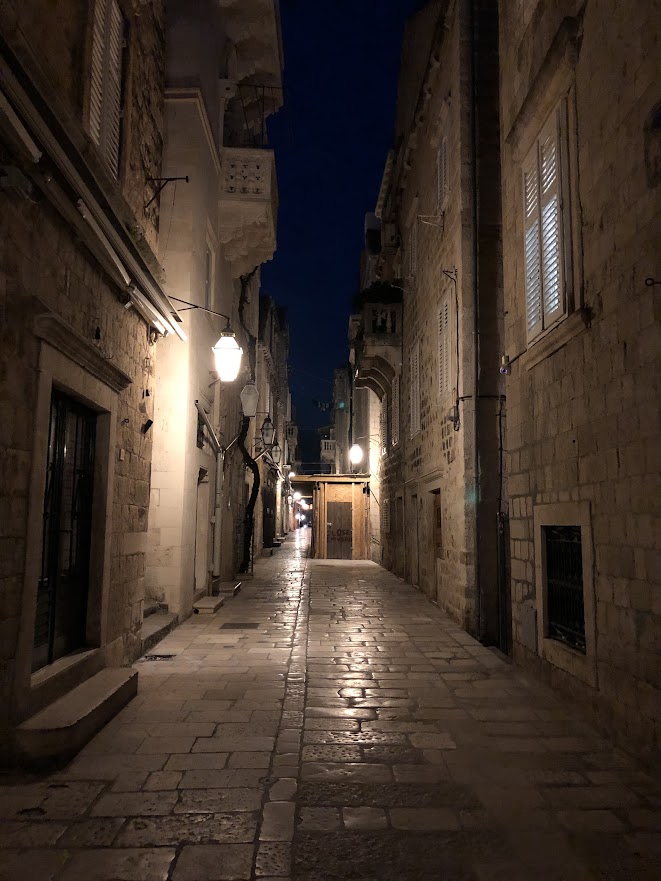 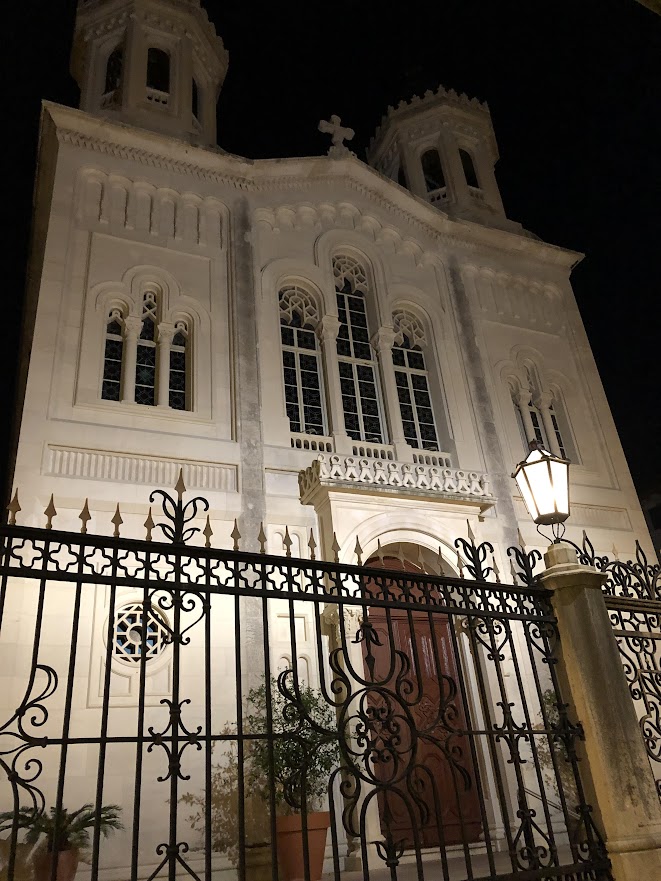 Below is the Jesuit staircase where Cersei in Game of Thrones had her walk of atonement. Apparently there have been times when people have tried to reenact that scene, in their birthday suit and all! 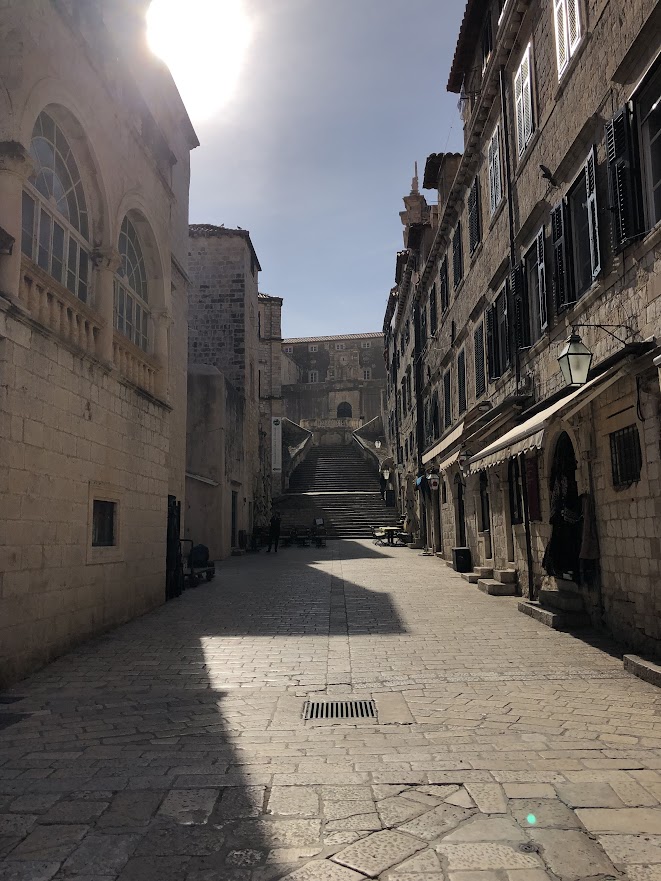 There is a nice cement dock you can walk out on and admire the sea beyond. The entrance is on the opposite end of the city as Pile Gate. You can see it really well from the city walls. 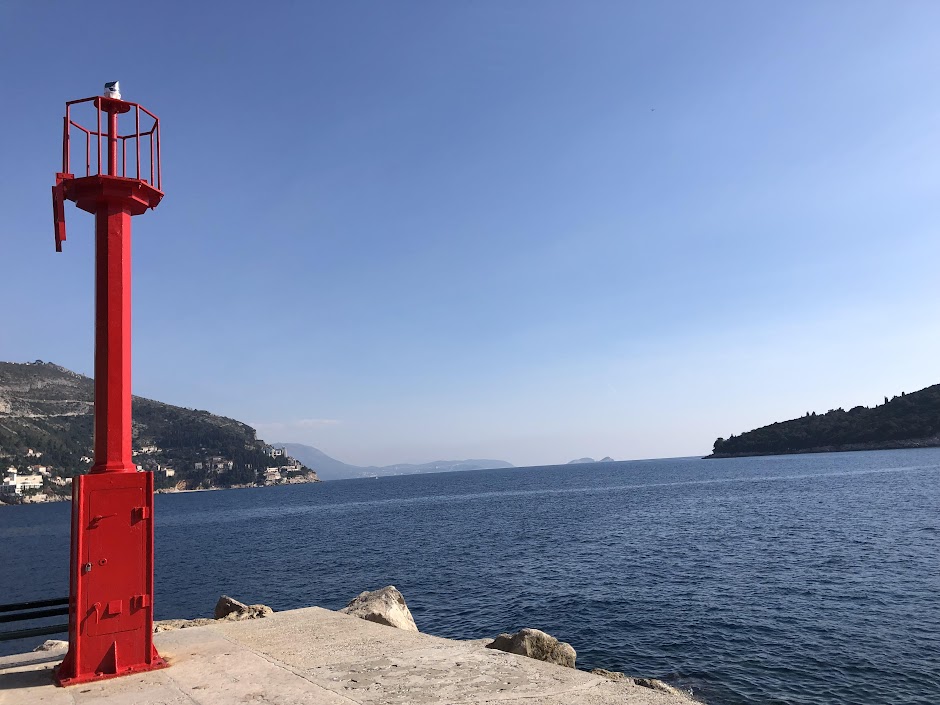 Dubrovnik Cathedral, which was the most grand of the churches we saw. 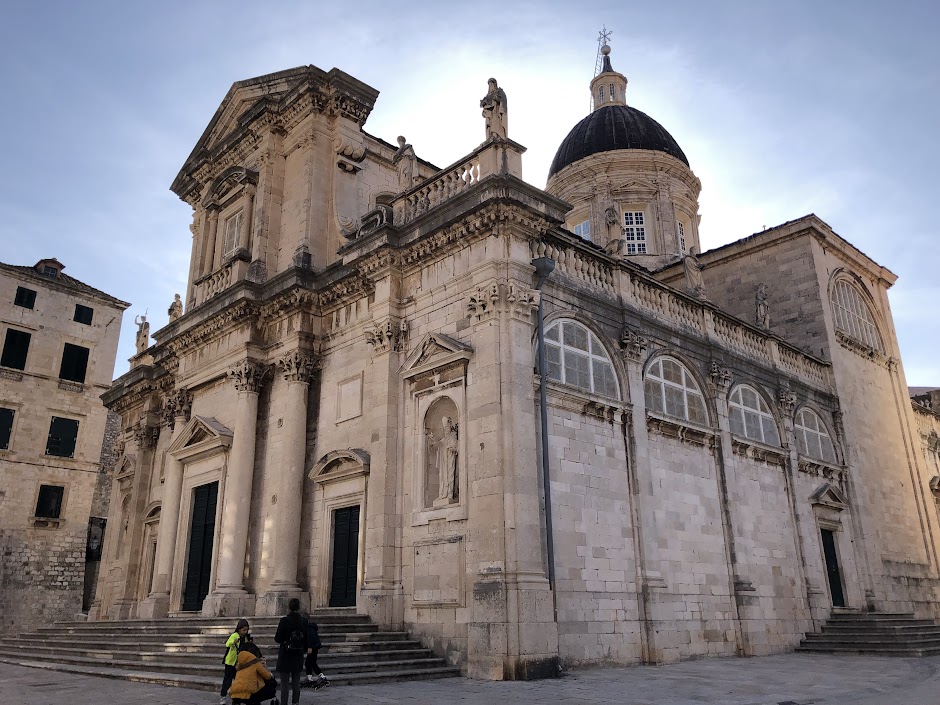 We ventured inside the Cultural Historical Museum, which had free entry included in our Dubrovnik Card. I really enjoyed the museum and would highly recommend it, especially if it’s a rainy day. 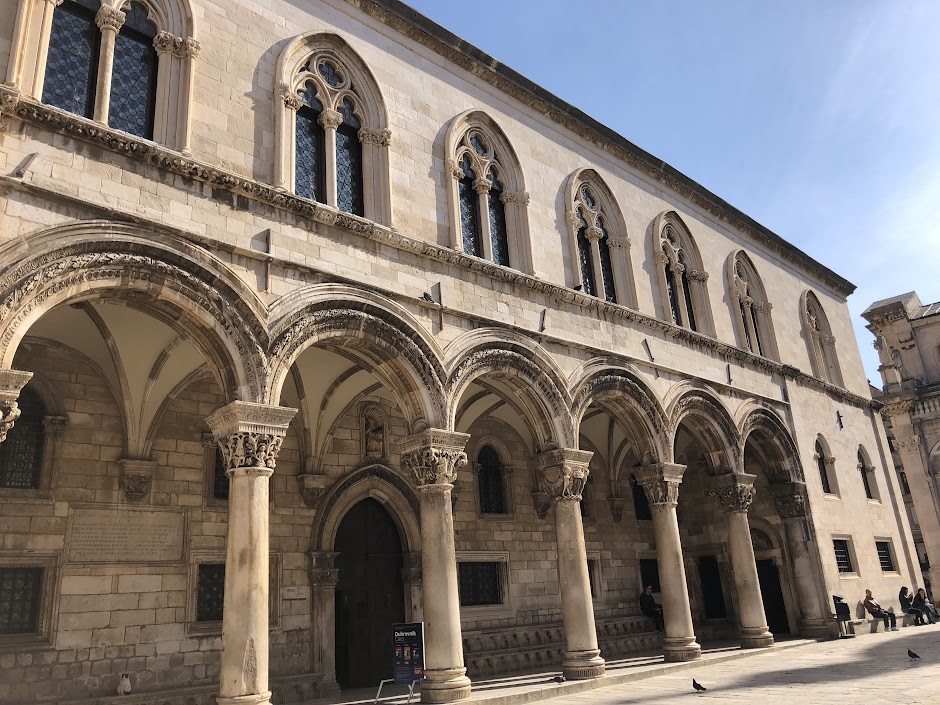 The best part of the museum was wondering around the building. This was the main foyer. Check out how grand that staircase is! 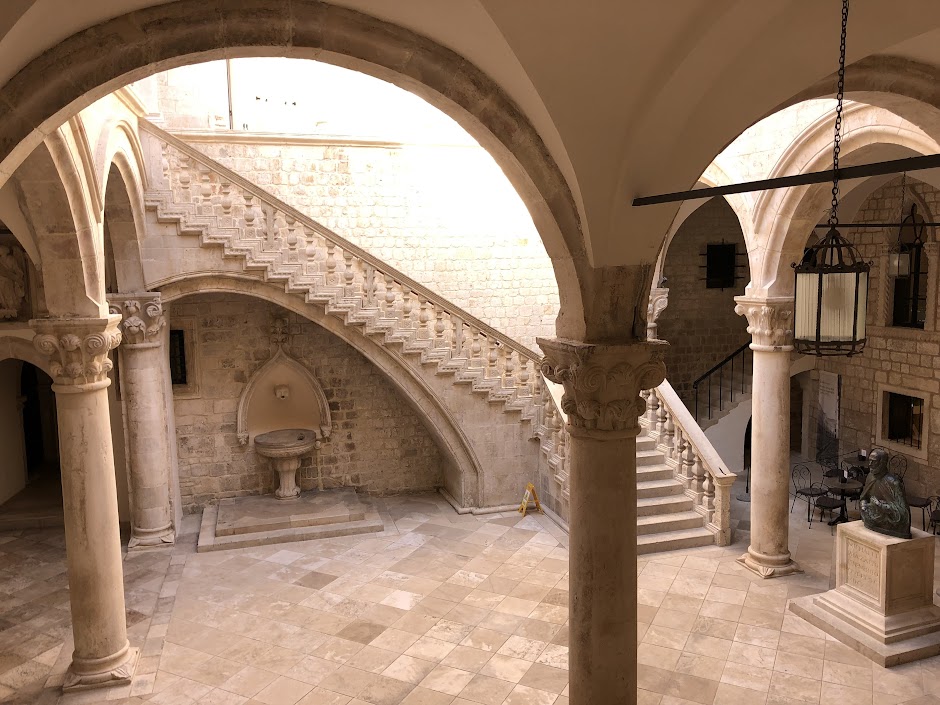 I really liked the shadow of the church bell tower on this building. This was near our hotel. 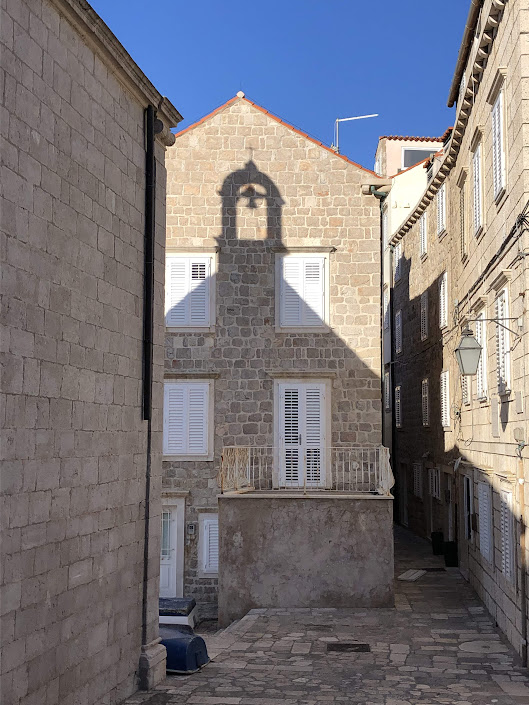 On our way back from Mostar, Bosnia and Herzegovina, we stopped to take pictures of the bridge that connects to Dubrovnik. 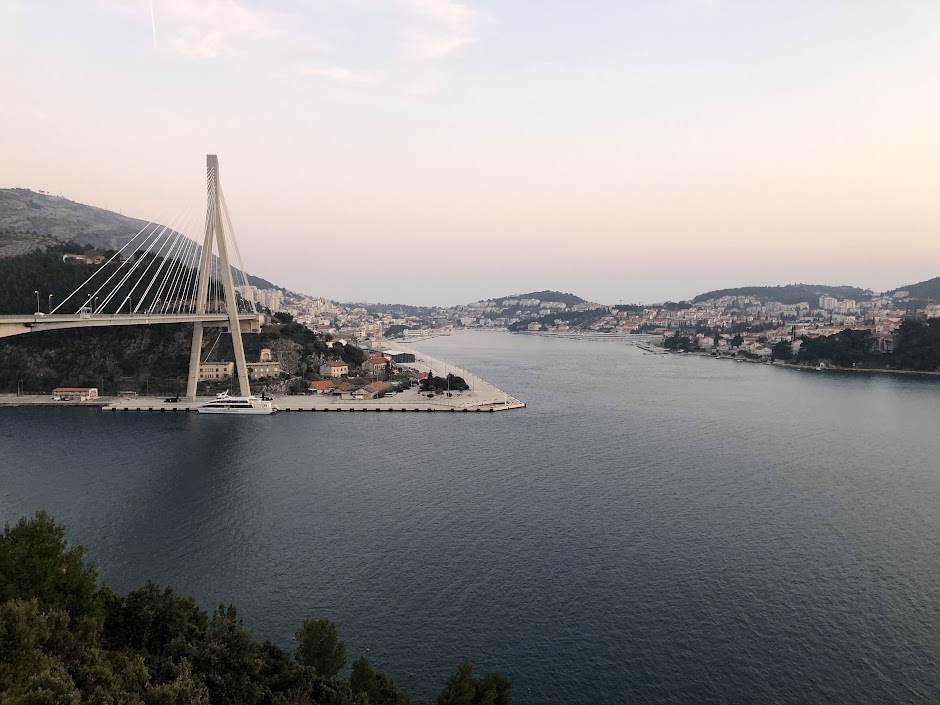 We also got to enjoy a beautiful sunset. 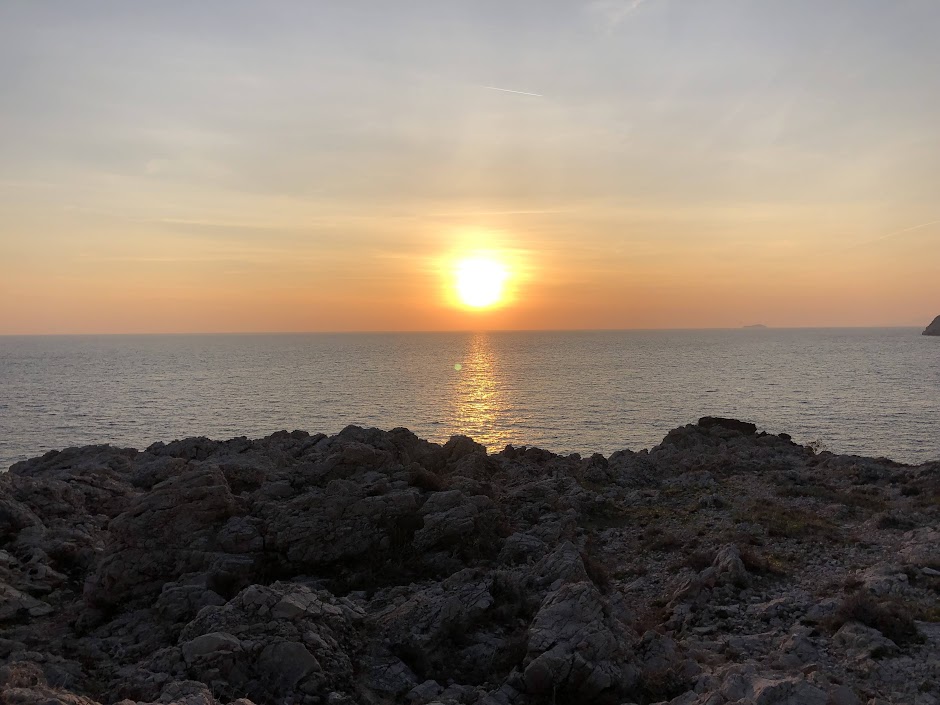 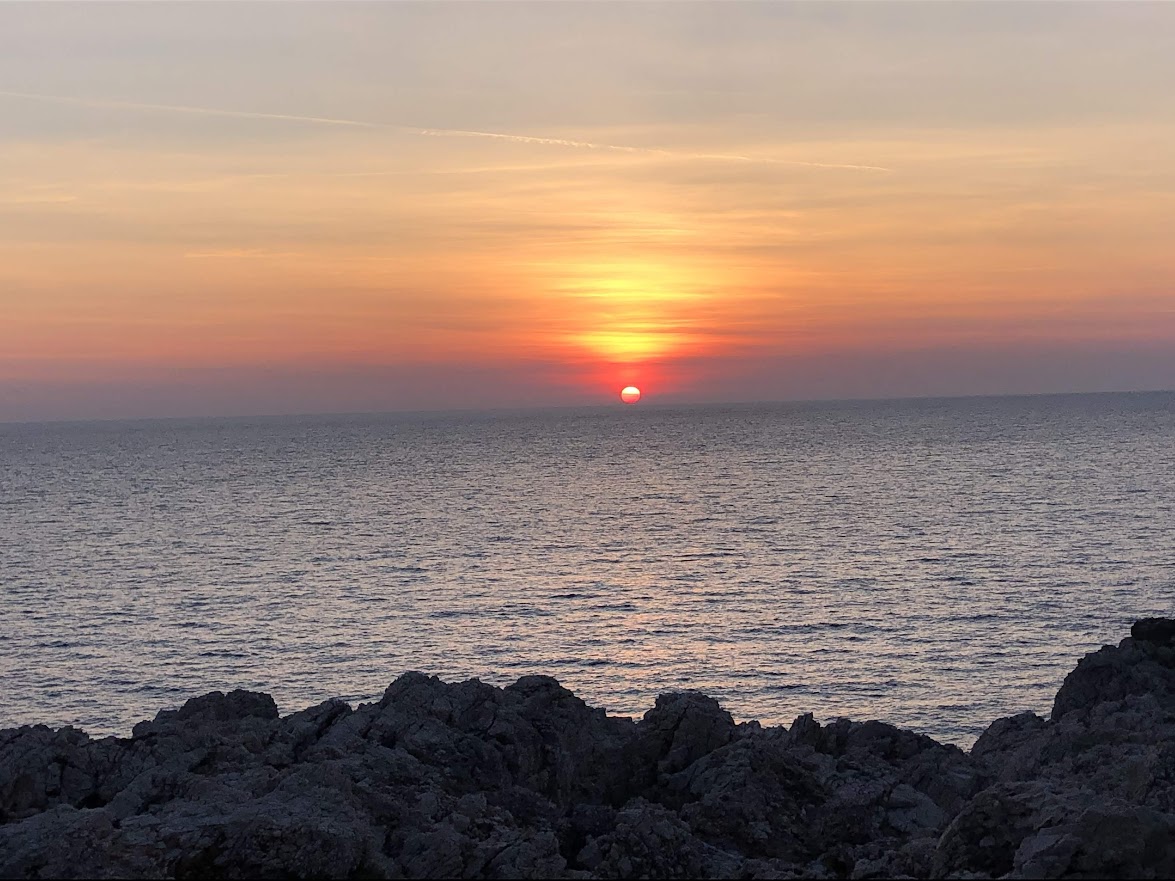 We ventured out onto the rocks outside of Dubrovnik for the sunset and got an awesome view of Fort Lovrijenac and the old city beyond. 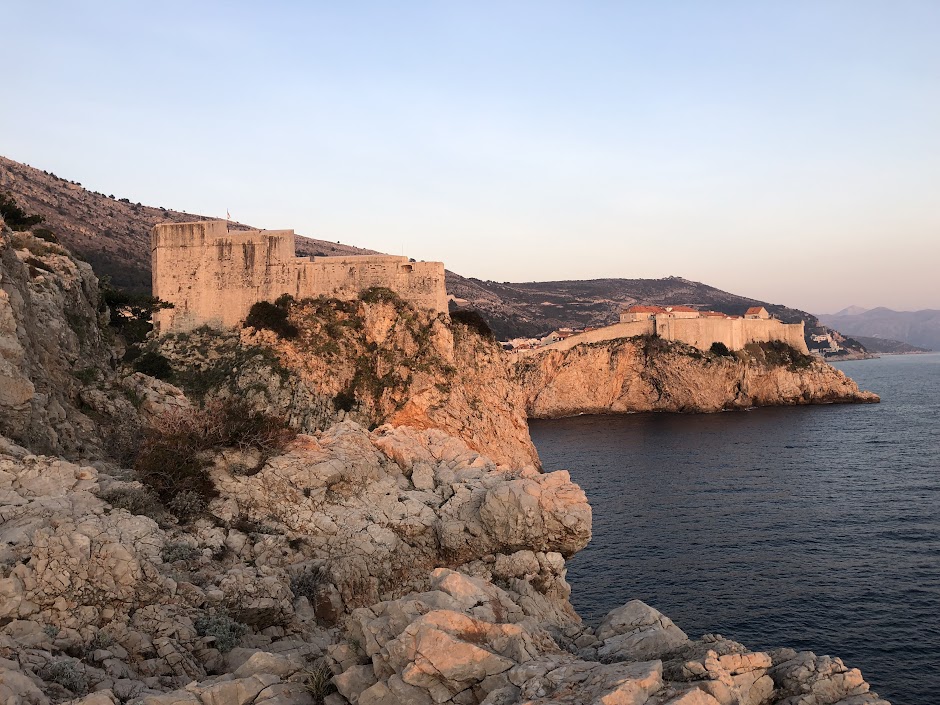 Have you been to Dubrovnik? What was your favorite part?

Looking for more things to do around Dubrovnik? Check out Fort Lovrijenac and Mount Srd!